I was given the photography task this week of conveying Cardiff from an alternative viewpoint through images alone no typography was to be used. The context we were given was that the images would be used to promote Cardiff and attract tourists to the city.

We worked in small groups 3/4/5 to complete this one day project. However, we were given 5 different headings to which we had to take photos for, these headings were; Urban Jungle, Hidden Gem, National Treasure, Autumnal Avenues and City of Culture. Following on from our earlier workshop on Visual Metaphors we were asked to consider what we had learnt from that session and apply things to the task.

My group initially took 30 minutes to gather ideas for each of the heading which enabled us to visually see what ideas everybody had on the various headings. In particular we struggled when thinking of Hidden Gems within Cardiff to start off with because we wanted to think of something different that others wouldn’t think of. I learnt from this that sometimes the most obvious answer isn’t always the best. The other aspects of the project that I particularly struggled with was that we weren’t allowed to include people within the photographs, I felt that this was another reason why we struggled to think of ideas for the heading City of Culture.

We then went out and around Cardiff to take the photos, we started by going to take images for Urban Jungle, we did this by take a image of Cardiff skyline we took the photograph on top of the the car park at St Davids.  We thought that we should capture the overview of Cardiff showing majority of Cardiff from an alternative angle that most people wouldn’t usually see Cardiff from. 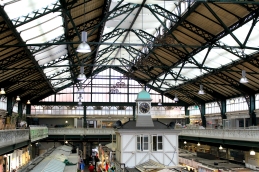 Next we moved forward to find the rest of the images, included a nice autumnal scene in Bute park and a hidden gem, a piece of graffiti art. I think that we kept to the concept we were given which was promoting Cardiff in an alternative light.

We then presented our final images to our peers, which we received feedback and thoughts on our images. I learnt that the idea of them all being linked in a particular way would have made them more of a set of images. Whether this be angle or colour having something that connect all 5 images together would have meant that the final outcomes were more successful. I think had we had more time I think I could have produced higher quality images and thought more about the composition of the images. I’ve learnt that composition is a highly important aspects when images are being used to solely communicate, as they say an image tells 1000 words. I know that for future projects the outcomes need to be stronger and maybe look more like a set rather than individual photos.