Before starting the next project we were asked to research and analyse title/opening sequences. I was specifically looking at the movement and how each title sequence celebrated the idea of movement. In each sequence I paid attention to image, type, sound and narrative, as this could impact the sequences.

This classic title sequence by DePatie – Freleng Enterprises works to communicate the clear narrative of the story. The sly music works well with the animated images  to tell the narrative that comedy overrides crime detectives within the film. The typeface chosen for the sequence is playful which compliments the narrative and the target audience of the film. The way that all these elements combine together they produce a celebration of movement in terms of a comedy sense. As another sequence I looked at was the iconic Star Wars sequence which doesn’t include any imagery. The type scrolling along the screen is perfectly timed with the famous Star Wars theme tune. The simplistic nature of the sequence has made it will known to the franchise and unique compared to other films. The movement within this sequence is the text mainly which highlights to the audience that they are about to witness something epic. The movement is celebrates the futuristic narrative that the film has.

The hit comedy TV show friends was another title sequence that I decided to look at because of its use of video and type together. The images/video used clearly highlighted the narrative behind each character within the show. The song that went along with the title sequence works well with the movements within the video so in light of that I think that this title sequences celebrates movement. 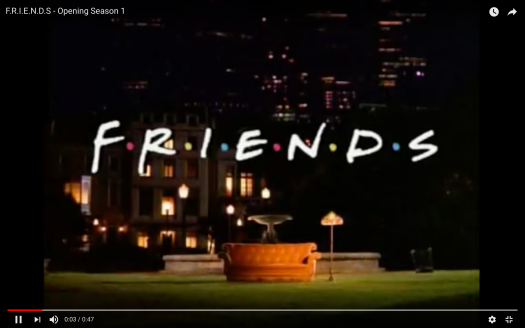 The title sequence of grease is an animated version of the characters within the film, which is how the narrative of the story is represented. The type and image combination works well as each aspects of text is generally introducing a new character in block capitals showing the importance of them. The music works well with both the image and type because it seems to flow and links to the handwritten script style type.

This classic Christmas film is a children’s comedy and this can clearly been seen throughout the opening sequence. The title sequence shows a book thats clearly been classically illustrated as many films were, however, using a few animated snow flakes to show movement as the pages were turned. The element of comedy is clearly shown through the stop motion animals that are used within the sequence and their actions. Even though they are discrete they still carry the narrative of the innocent comedy.