Having decided to develop the 3rd initial idea further I went back to my research that I had conducted and found that there were some element which I needed to include within the GIF I was creating. Firstly, the pause showing the logo needed to be longer at the end I felt that this was a key component in one of the GIF I had researched. Also, I felt that I needed to brainstorm more ‘phrases’ to go along side the imagery because I felt currently it was basis and unlike my research didn’t appear to have a humorous element to it.

Also, I thought that the red glitter particles in the drink weren’t bright enough they were a little dull, so I experimented with changing the hue/ saturation levels in the image. Through changing the red saturation, the glitter stood out more compared to the initial idea. Through this panel I realised that I could experiment with changing the colour of the glitter, as the colour scheme is blues, black and white with yellow thrown into the mix, I decided to experiment with how the image would look if the glitter was a dark blue to gain a similarity between the campaign logo. As this is a collaborative project I spoke to my group about the idea of changing the glitter from red to blue. Although the red stands out against the ray background, it was decided that the blue was more in keeping with the colour scheme across the campaign.

Using a few creative thinking techniques I brainstormed some idea of phrases and words that could go along slide the image. Phrases I thought of initially were ‘Think. What’s in your drink?’ and ‘what could be in your drink?’ however, I felt that these didn’t really communicate the idea of plastic consumption. As it’s supposed to be a disgusting drink with bits of plastic in it I thought about including the word ‘plastic’ to highlight that this isn’t something just pretty. The use of the ‘plastic cocktail’ in the imagery gave me an idea about using synonyms for drinks such as appetiser, aperitif or liquor. When pair with the word plastic I decided that ‘Plastic Aperitif anyone?’ was funny but also kept within the serious tone of the campaign. 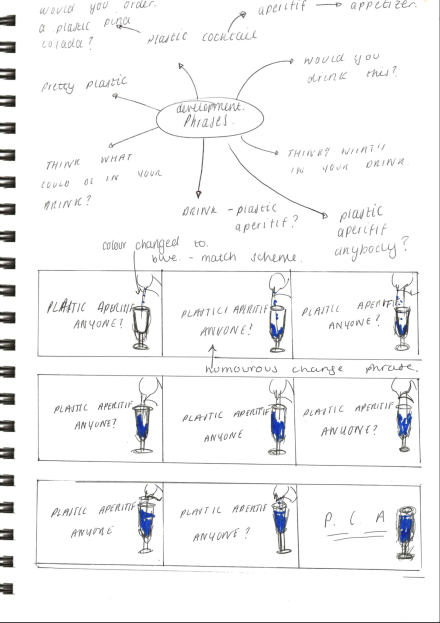 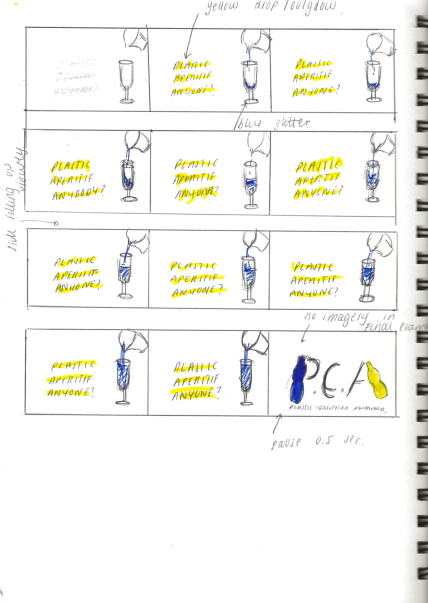 Again using the typeface DIN Alternate Bold keeping in with the lines which the team had set I decided to play around with drop shadows and outer glows to try and make the type stand out again the background. I kept within the colour scheme when experimenting with the type. The first development used all the new elements of the gif that I developed, including a while drop shadow. However, in this development the type looked too squished together meaning that it was difficult to read. With an increased point-size I think that the type would work better.

The next development I did I took into account the element that I felt didn’t work well in the first development. I changed the point size of the type which meant that is wasn’t as compacted. Furthermore, I changed the drop shadow colour  to match the yellow that has been used in the logo. I thought that this might add a different element to the GIF and make further links to the campaign. Compared to the first development I think that this development highlights the key elements of the campaign. Also, like highlighted in may research I felt that I needed the logo to stand alone at the end of the GIF, with a 5 second pause. There is no image when the logo is shown which means that the eye is draw directly to the campaign logo. The scale of the logo is large, this is something I could experiment with further to see if a smaller scale could work better.