This second week focused on pop art, we looked at these main areas;

Linking back to last week we started by looking at similarities and differences between pop art and abstraction, looking at a painting by Kenneth Noland, Cliff, 1961-2 and Jasper Johns, target with plaster casts, 1955 we were able to compare the styles. The colours used and the fact that there was concentric circles in both were clear similarity between the two paintings. However, through discussion John’s painting of the target could actually be a target wheres as Noland is purely optical cannot be anything else. Furthermore, we compared Roy Lichtenstein and William de Kooning, while both painting held the vivid yellow colour Lichtenstein brushstroke is made from different marks which cannot be seen and look as if it should belong in a comic strip whereas Kooning work is abstract but you can clearly see the paintbrush stroke. 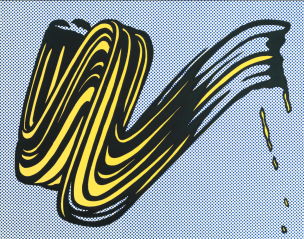 From this is seems that Pop Art paintings point to things that are outside the boundaries of the canvas, Lichtenstein to comics, Defrene to the city and Johns to the arcade. This goes against GreenBergs theory that we looked at last week as he says it only should matter to whats contained within the rectangle.

One of the text we read this week was by Lawrence Alloway, who’s argument although written in 1961 is still current today. Alloway talks about the Taste Pyramid which highlights popularity of likes, for example he used Picasso at the top while Elvis is at the bottom. The pyramid hold status, the higher up our like is on the pyramid the most stars you hold. Art work would be nearer the top of the pyramid we discussed because if Picasso is at the top (in this example) then you must have a knowledge about it, as anybody can like art. Furthermore, art isn’t as accessible to people therefore it’s going to higher up. However, he thinks that the taste pyramid ‘smears people’ as you can have various likes and it ranks people by the artefacts they like leaving people to be ashamed if their likes are lower down. Alloway suggests a continuum where everything is equal and there are different path ways to get to each different thing. This leaves people to move around freely without being ranked on status. We also discussed the idea of cultural capital which states that the assets you own also give social status including abilities and possessions.

Later on in the lecture we discussed what makes a commodity a commodity, we used this simple formula to explain: A commodity = material + human labour + market. Therefore an artefact that has no market cannot be a commodity. This lead forward to discussions around food and shopping, where we looked a a text by Oldenburg. His attitude to America culture is good, he states that everything is equal in his eyes. This lead us to question does that mean everything is good even acts that are socially consider good. Oldenburg doesn’t have a taste pyramid, a sweet wrapper is equal in status to a painting according to him.

Finally we discussed gender within Pop Art, it is key to some pop artist but not all. Looking at Pauline Both, It’s a man’s world 2. 1965-66 we discussed the idea of what the contrast between the two different panels could suggest. Central panned could suggest what a man’s desire is of the world and the background behind is what the world really looks like. However during the discussion the idea that the central figure in the panel is somebody trying to escape the the sexual exceptions that society has for her, the other two panels represent where she trying to escape too.