In order to start developing the project further I needed to think about the aesthetics of the app, as this is something that I have only really touched upon so far. I decided that the app was now only going to be based around dog walking which meant that I need to find a name for the app that clearly showed this to the viewer. I decided to go with the name Dog-go because I feel that it shows the viewer exactly what the app is about; the word o indicating ‘going out for a walk’.

I started to think about things that relate to dogs and dog walkers, and in my sketchbook started to develop some keys ideas about what the logo and app icon might look like. I thought about having a dog include in the logo just to make it even more explicit that the app is for dog walkers.

I then took this into Illustrator where I started to experiment further with concepts. I thought that the image of the dog was one of the strongest that I had come up with therefore I wanted to develop further. I didn’t want the logo to have to much detail so using a line drawing style to illustrate the dog I thought was the best way to do this. Using the pen tool I was able to illustrate the lines to resemble a dog form.

In terms of typography within the logo I had no ideas how this was going to look. From the research I had found that majority of app use a sans-serif typeface and there weren’t any that I could find that used serif typefaces. This was something that I followed suit with and decided that the typeface would be Sans-serif. I spent time typing out the name ‘Dog-go’ in different san-serif typefaces to try and see which one I thought was going to work best. In the end I felt that the typeface bubblyboddy Neus trial was the best typeface to move forwarding because it made the name look correct and I felt that it was a good balance between being too formal/corporate and being childish/ informal.

I was now able to start to experiment with the logo design in illustrator considering colour palette for the logo and app. From the research that I had conducted I found the colours schemes mainly used were greens and whites with a few using red, I wanted my app to stand out however, I wanted to ensure that I wasn’t using a colour scheme that people thought was completely new.  I experiment with a range of colour schemes to begin with, red, green and blue.

Starting off I used the dogs head to act as a hyphen between the two words, which I thought worked well and gave a clear sense of what the app was about. I then started to experiment with using the arrow to cross the two G’s, with the arrow acting a symbol to highlight the sense of going out somewhere. I felt that this design worked better on paper sketching rather than on the screen and as this is a design for a digital content I eventually ruled this out. Through considering was else related to dogs I thought about paws and paw prints, in turn leading to the idea about the using the o’s in the words to create paw prints. I felt that including these made the logo more apparent to the content of the app.

I also experimented with upper and lower case letters within the logo, I thought that the uppercase suited the name better as I didn’t think that the lowercase gave the name the right attention. After spending some time I thought about experimenting by combining different element of the ideas together which lead to the idea of removing the arrow, keeping the paw prints and using the dog within the logo. I feel as though this outcome was the strongest because it was clear and there wasn’t to much going on at once. I think that I will use this logo within the app.

Thoughts Behind the Colour Scheme

One thing that I knew needed to be consider throughout the course of the project was the audience for the app which is dog owners. Even when considering the the colour scheme it was important to keep them in mind. I thought was the relationship between a dog and owner, what does it look like? what best describes it? I thought about my own relationship with my dog, the idea of love, care, loyalty and trust. This got me thinking about the story of Greyfriers Bobby which I heard when I went to Edinburgh last December. The story talks about the fact that once his owner passed away bobby his dog would sit on his grave everyday and would only leave his masters grave for food at 1 o’clock. He became well known to the locals and when Bobby passed away after 14 years of guarding his owners grave, Bobby was given permission to be buried in the graveyard near his masters grave. 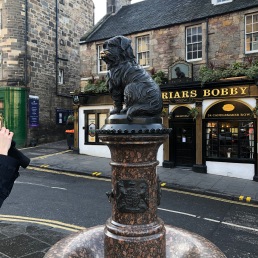 Images from my visit to Edinburgh December 2018

Using this idea of loyalty and trust being an everlasting bond between the owners and dogs, I felt that this was an important part to include in the dog walkers/owners aesthetics I decided to do some research onto colour theory and found that blue is associated with loyalty and trust. With this in mind I have decided that the colour scheme of the app, logo and icon will be blues and white (dark blue, light blue and white). I think that this was the strongest colour that I used throughout experimentation but also it means that my app will stand out on the market.