Following the feedback gained from the user testing exercise I undertook I started to develop the app prototype further. I have tried to develop on all the areas that the feedback pointed to because it is really important to consider the users thoughts.

I have started by changing the layout on the chosen route screen as the user thought that it could be easier to read and some of the elements would be better place elsewhere on the screen. I thought that moving the rating to the bottom of the screen would be best because it allows it to have the space that it requires. Also aesthetically I feel that it looks better at the bottom and having the weather and sunrise/sunset time next to each other. By having these to elements next to each other also makes more sense for the user as majority of people read left to right therefore they would receive linked information together with this layout. 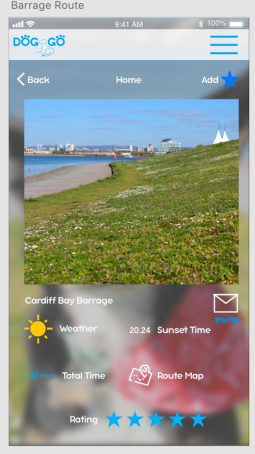 I have also developed the adding route system on the prototype following the feedback about safety. I have added an option to make the route private (can be shared with friends) or public because I thought that this was the best way for the app to consider the safety of individuals. These private routes would then be saved under your favourites and cannot be viewed by anybody without your permission.

There were also some elements which I felt where missing from previous developments including a disclosure agreement. As I’d had previous discussion around safety I thought that through adding this disclosure agreement at the start of the app (this would only be for the first opening of the app) would ensure that the users were aware that the app cannot be held accountable for injuries etc. On the disclosure po I  have added a tick section for the user to tick, this will then allow the user to continue and sign up/login to the app. This should ensure the user reads these conditions and looks out for their safety.

A new element which I have added is the ability for the background of the app customisable to the user as this is key. This can then be accessed in settings part of the app prototype as from my analysis of most apps this is where information like that can be accessed. This needs accessed to the camera roll to allow the user to chose and there is an option for this to be allowed. Once the image is selected it will allow the user to add this as the background.