After reading Ethel & Ernest (Briggs, R 1998) I found that the use of splitting the different decades of the narrative through chapters was something really interesting and inspired me to think about how I might do this myself. Until now the decades have just rolled into one another, which as meant that you might jump from 1970 straight into 1975. This might cause confusion to the reader, whereas if I was to include some sort of chapter heading within the book this might help the reader to understand the jump in time. As I am the creator of time within this narrative, it allows me the ability to jump in time however understandability this might cause confusion.

I have found the idea of taking a double page spread within the book and using it to show the dates of the generations. For example, Billie would be 1915- 1940 but then Kathleen would be 1949 – 1970, these double page spreads to be placed in between each of the generations being born. Taking the example of the 9 gaps in time between Billie and Kathleen, I decided that this wasn’t required as my grandmother was born therefore has no link to the story of how the photograph of the 4 generations came into being. These double pages would have the ‘lifelines’ of the characters as you might not see them in all the images within the sections, but this would symbolise that they are still part of their lives. 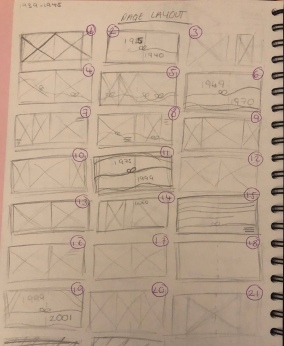 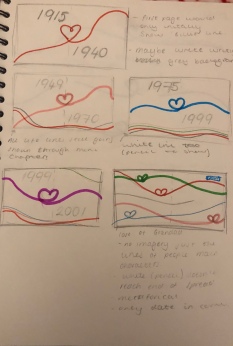 This idea then leads me on to think about how I could show the loss of my great grandfather as he passed away before I was born meaning before the photography (4 generations) was taken. I wanted to include this because I felt that he is an important part to the narrative, and it would be right to just ignore the fact that passed away. Using a double page spread and the lifelines I would have all the lines drawn going from one side of the page to the next which would indicate them moving forward to the next page however, my great grandfathers’ line wouldn’t go all the way across the page. This would make the reader think as I want them to have an active part in the narrative, and through not show showing a photograph of the funeral it allowed the viewer to think more and then understand what the lines are within the book.